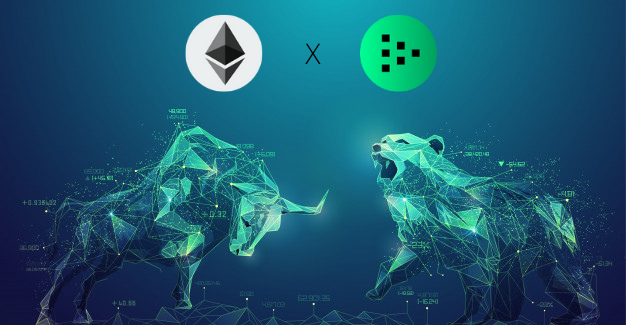 What does another bear market mean for ETH miners?

As the price of ETH falls most ETH miners begin feeling the squeeze on profits. Most rigs become unprofitable as the hash rate drops with the falling price and we see miners unplugging their miners in order to save themselves from losses.

Until the hash rate rebalances and fewer miners are competing for the next block, idle GPUs face unknown downtime until the price of ETH rebounds and cash flow picks up again.

This is mainly due from the fact that ETH mining produce 2 ETH per block and remains constant regardless of demand or competition. Scheduled rewards are great if the price continues to rise, much like speculating on the price of ETH, higher price means greater revenue.

Miners must typically sell their ETH immediately in order to pay for huge overhead of electricity and operational costs. They would also prefer to have regular cash flow than to sit on ETH in order to speculate on the price, since you can do that at any time without the effort of being a miner.

The introduction of Livepeer Video Mining

Livepeer Video Mining on the other hand has the inverse effect. Video Mining (or more accurately, Video Transcoding) provides ETH rewards for each video segment transcoded in real time. Like ETH mining, Video Mining provides the opportunity for GPUs to generate ETH income from their advanced hardware.

The difference, however, is the structure of how transcoded video is paid to Video Miners. Unlike scheduled rewards with ETH mining, Video Mining is charged per pixel of transcoded video and the Video Miners set their `price per pixel` relative to the free market supply and demand of live video transcoding.

This means, as the price of ETH drops, Livepeer Video Miners charge more `ETH per pixel` in order to compensate for the falling price.

Since most video transcoding services, such as Amazon or Cloudflare, price their transcoding work in dollars, the relative amount of ETH rewards for Video Mining will rise as and fall relative to the price of ETH.

Why is this important?

Video Miners have the ability to generate revenue in a more consistent way that provides greater stability for regular positive cash flow. Video Mining becomes the bear market savior for idle GPUs that would otherwise be turned off during a bear cycle.

Here are some illustrations of ETH rewards generated by Video Mining in comparison to ETH mining. As you can see, Video Mining becomes more attractive as the price of ETH falls over time. 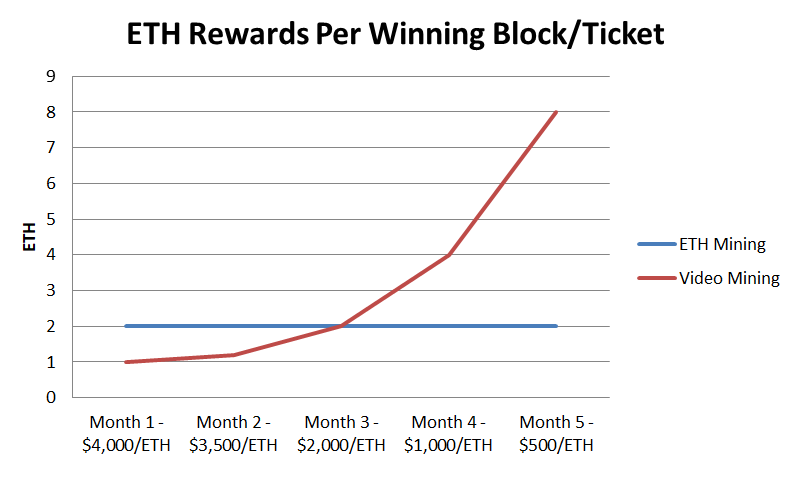 As you can see, the farther ETH drops in price, the greater the spread between the two protocols and the ability for Video Mining to increase its ETH rewards as income.

The opposite is true during a bull market. 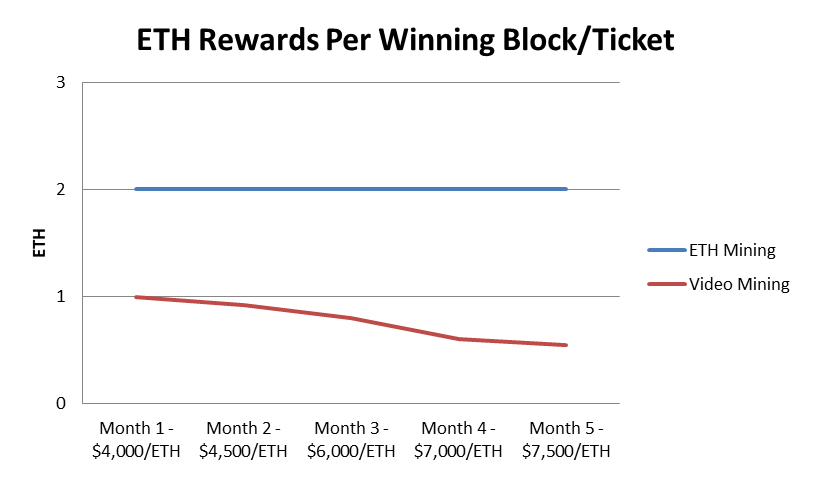 Given these two examples, you can visualize the choice between ETH mining and Video Mining and start to see the dynamic risk factor of each protocol.

But the real secret sauce to understanding these two protocols is the understanding of the chips on the card that each protocol uses.

ETH mining uses CUDA cores for block production, whereas Video Mining utilizes the Encoding and Decoding chips on the NVIDIA cards that are not used in ETH mining.

Yes, you read that correct. These protocols use different parts of the GPU optimized for different tasks in the video world.

The wonderful concept of Dual Mining has arrived

Why not diversify your economic risk with an opposing risk protocol that provides increased ETH cashflow during a down market.

While yes, technically they both utilize large degrees of vram on the card and currently Video Mining is limited to roughly 30% of max Video Mining capability while dual mining, most ETH miners would be excited to leverage a 30% increase in extra output from a GPU.

There are other factors for Video Mining that determine how successful dual mining will be, such as internet bandwidth and location.

But with Video Mining’s exceptional low requirement for electricity and higher revenue per card, dual mining might be the answer to a risky situation to ETH miners.

Another factor is ETH moving to Proof of Stake with the release of ETH 2.0 and GPU mining landscape changing dramatically. That is an entirely different conversation that will be covered in another article, but for the time being, the addition of Livepeer Video Mining could assist in the ETH miners risk problem.

How to get started?

There are several ways to leverage dual mining with Livepeer. Here are a couple examples and resources to get started:

Full disclosure, at the time of this writing, Video Mining on Livepeer is still in its infancy in terms of adoption. Video Mining requires demand from live streaming platforms, examples such as Youtube or Twitch, of which would use Livepeer infrastructure for its backend video transcoding work.

Large ETH mining operations should start with small amounts of GPUs to dual mining on the network. This is important to keep in mind as to keep expectations in check while writing this in January 2, 2022.

Thank you for reading

If you like this article and want to support this type of content, you can delegate your LPT tokens to the Titan Node Livepeer Orchestrator.

Visit Titan-Node.com for help, tips and tricks in the Livepeer ecosystem.

Are you interested in making passive income with your idle GPUs?

You can join our Video Mining Pool quickly and easily.

You can watch our Video Tutorial for step by step instructions.

Or click the link below and get started today.